BC Biking Trip and Pictures

Had a grand time! Would love to do a bike trip like that once a month. Don't know where I'd find the money to do it with but .....  I never say never.

Who knows what could happen to bring more of these type of adventures into my life. I'm always up for new experiences and challenges. Bring it on, I say!

This bike ride took the four of us, my sister, her friend, my partner's daughter and myself down the Lochside Trail from Swartz Bay to Victoria. It's a 35 km ride past beaches, farmland and wetlands, down country lanes and beside suburban backyards.

We spent our first night in a historic hotel in downtown Victoria and the next day we rode 55km down the Galloping Goose Trail. What a beautiful ride that was. We were surrounded on both sides by forest, we cycled past ferns, shasta daisies, foxgloves and blackberry bushes. By late afternoon we arrived in the town of Sooke where we spent the next two nights.

The following day we cycled up to the Sooke Potholes Regional Park where there is a series of deep, polished rock pools and potholes that were naturally carved into the bedrock of the Sooke River. There were some young locals gathered at the potholes braving dipping in and out of the cool clear water.

All together, we cycled for 200 km. there and back to the ferry terminal and we were blessed with the best kind of cycling weather we could have asked for. Not too hot and not too cold.

Also did a bit of touring and relaxing by the sea. Walked the ocean boardwalk in Sooke, and spent an evening watching what I assume was mama and papa seal keeping an eye on their two pups frolocking in the sea. What a show they put on for us splashing around, diving up and down and poking their heads in and out of the water.

Of course the trip would not have been complete without a shell and rock and rock collecting time. Can never go to the ocean without fitting that in too. Can't wait for my next biking adventure! 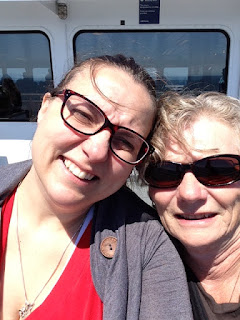 Nicole and I on the ferry from Vancouver to Swartz Bay 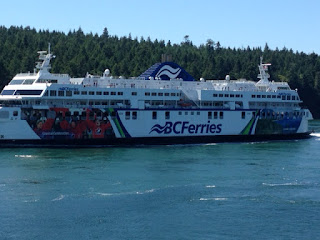 On our 1.5 hour ferry ride from Vancouver to Victoria where we will start our cycling self directed tour. 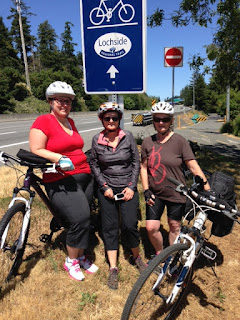 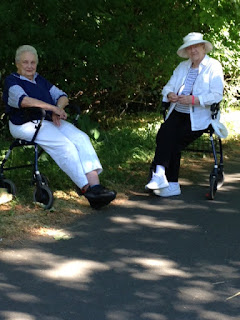 These two young ladies, 91 and 92 would you believe, were having a rest and a chat on the trail. 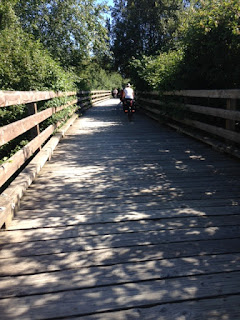 One of the wooden bridges and trestles to cross over. 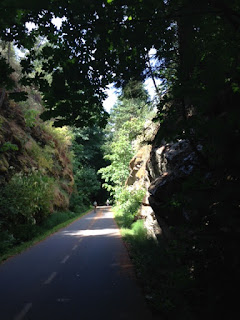 A part of the paved trail. 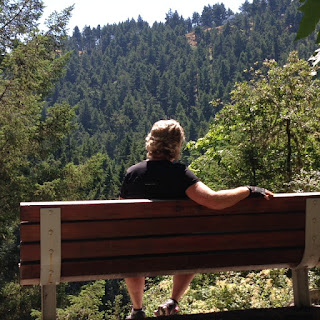 Couldn't resist a few minutes of meditation in this spot. 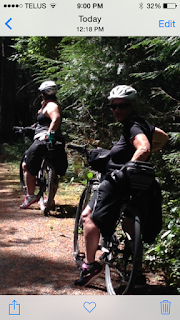 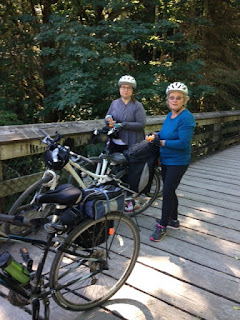 A snack attack on the bridge. 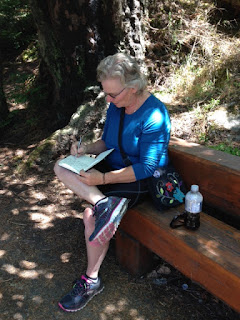 Lunch at the Potholes and a little writing before getting on the trail again. 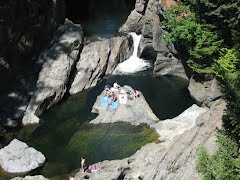 And here are the potholes. 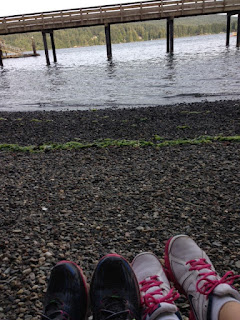 A long, long boardwalk in the ocean with a return path through the forest. As you can see the tide was going out when that photo was taken. 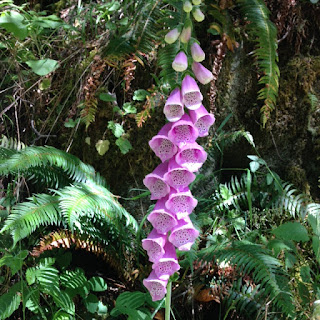 Aren't these the prettiest wildflower you've ever seen? Foxgloves is their name. 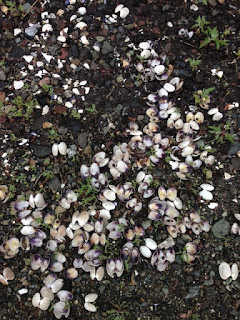 I think someone had a clam party on the beach.