Did a little writing this morning while I ate some granola and sipped my Alpine Berry tea. An awesome way to start the day.  I need to get up earlier during the week so I can have time to do that before heading out to work. Of course that would require that I haul myself off to bed a little earlier too and that never seems to happen.

A little later, I ran into the shower and left Andree to answer the door when her sister and brother-in-law stopped in for a surprise visit and caught us both in our pj's.

After lunch, Andree and her sister decided to go play crib at the senior's club here in town and I headed out for a nature walk along the canal. I threw my journal, my pen, and something to sit on in my backpack and away I went.

I walked 5.5 miles altogether but I stopped to wrote for a while. Who would have thought that on Nov. 13th, in Northern Alberta, I could sit outside and write without freezing my fingers or my butt off. 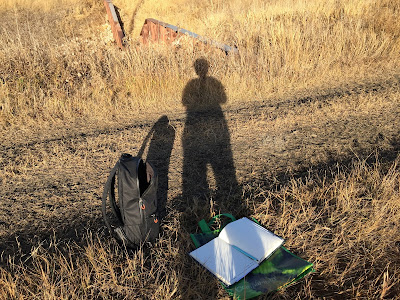 Out in High River where 2 of my two daughters and 3 of my grandchildren live, it's been exceptionally nice, even more so than here. In fact they've been warmer than the Okanagan for the past couple of weeks.

So for sure there's no snow in High River, or in Mariville, which is about 45 minutes North West of High River, so who would have thought that while they were out there they would run into Santa and his Reindeers. But that's just what they did!
This evening, we were invited out for supper and a game of cards with some friends of ours. It was a delicious meal with wonderful company and a great way to end the day.
Posted by Unknown at 23:57