It rained a little bit last night but it was a beautiful morning just the same. So Diane and Gypsy, (in the picture below), and Wayne and I went for a morning walk along the lake just across the road from where they live. They showed me where last year's arsonist started a fire that ran up the mountain side and burned down six of their neighbors home and also came within 50 yards of their own. Such stupidity and insane behavior. I just can't wrap my head around people deliberately setting fires. 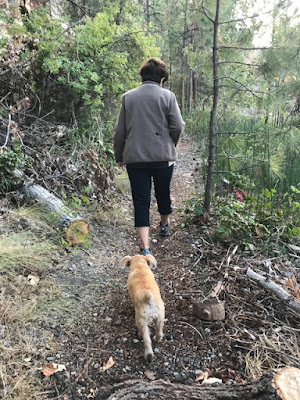 I came upon this creature on our walk and thought he made kind of a pretty picture sitting on that
piece of drift wood. Although I suppose some would beg to differ when they see a slug of this size. 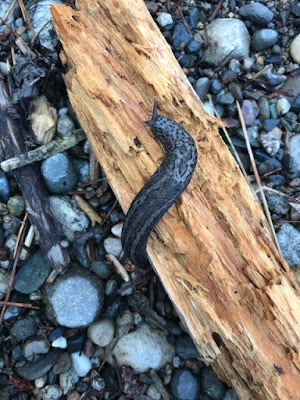 Right after our walk Diane and I loaded up our bikes and headed out to the trail head where we met up with two other riders that decided to join us on this beautiful morning. The 18 km trail around Woods Lake, I am told came in at a cost of 28 million dollars. The first 20 million was to buy the property from CN and the other 8 million, which was funds that were raised, went for the development of the trail.

Half of it is paved and the other half is hard packed gravel base. An awesome, scenic and easy ride which was perfect to start things off for someone like me who hasn't had much of a chance to ride this year. But, oh, what I would give to have a such a lovely trail closer to home. Below are two of Diane's friends, Betty and Kathy who joined us for this first day and yours truly on the far left. Another lady, by the name of Merk, who's a high energy ball of fire, joined us for half the ride then went ahead of us on her merry way. 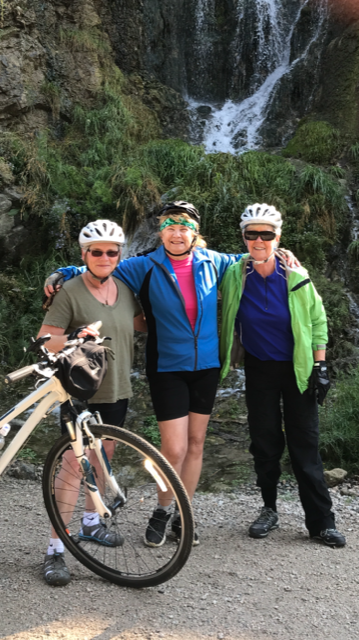 This is Woods Lake. It would be cool to have a video camera mounted on my bike to give you a really good view of what it's like to be on such a ride down the trail that offers many different aspects of nature along the way. 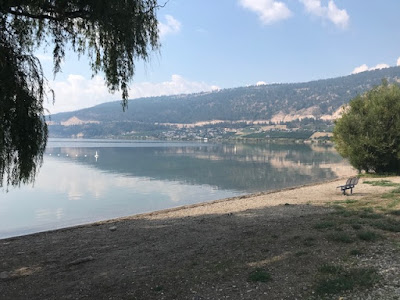 By late afternoon I was relaxing on the rocky beach in front of Diane's house with my book and journal in 22 degree weather while Andree was telling me it was 8 degrees and raining at home. Part of my journal writing was about how my heart is overflowing with appreciation and gratitude because I am fortunate enough to be able to do be here and do this. The only thing that could make it better would be to be able to share this with Andree but this isn't her world and that's okay. Her and I had a great two weeks together touring Northern BC. at the beginning of August. 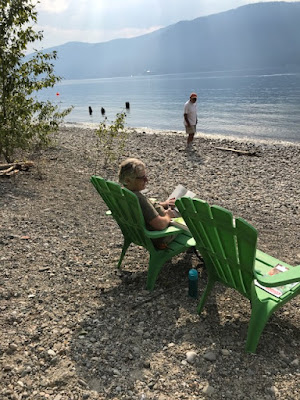 Diane talked to me today about her fear of water since her best friend drowned just a little ways down from her place last year. She was there the next day when divers located her friend's body in 45 feet of water and brought her to shore in a body bag. She spoke about how difficult it was to be there for her friend's husband when she was in such deep pain herself.

When she spoke about how she became fearful of entering the lake it made me think about how I had to work through a fear after Kevin's death; the fear of leaving my children in someone else's care. Diane also had to conquer a fear; that of of getting back into the lake where her friend had drowned, and she managed to do it with the aid of pool noodles and other floating devices.

That's the thing with fear. A person has to nip it in the butt before it takes over and grows into something unmanageable that controls our life. Like the book that Susan Jeffers wrote; sometimes you have to push through the fear. You have to, "Feel The Fear And Do It Anyway," in order to embrace life and live it fully.

I'm going on and on here. That's what happens when I have time to sit back and process and write. Geesh! I better get off this computer and go read for a while.

Looking forward to day 2 of riding. Tomorrow it's the KVR Myra Canyon Trestles.