Smart TV or Dumb Me?

Andree's kids bought us a Smart TV for Christmas. Yesterday, we decided we were going to mount it on the wall and install a floating shelf underneath to hold the sound bar. That took a little more figuring, planning, measuring, hefting, holding, and tools than I had, at which point, I enlisted the help of my brother to lend a hand and a drill bit. After about an hour and a half, (except for moving the electrical outlet in order to hide the cords), "Voila!" It was done! Now all that remained was learning how to program and operate this thing. Ya, right!

For those of you who don't know, what a Smart TV is, it's a combination of a flat screen TV and a computer that connects to the Internet. It can access all the apps on our Smart Phones, plus it has a whole bunch of other apps we can access that allow us to do numerous other things. We can tune in to Sirius radio, You Tube, Netflix, Weather channel, numerous places we can rent or buy movies from such as Google Play, Cinema Now, and much more. We can even access the internet to do a search and a host of other stuff, some yet to be discovered. 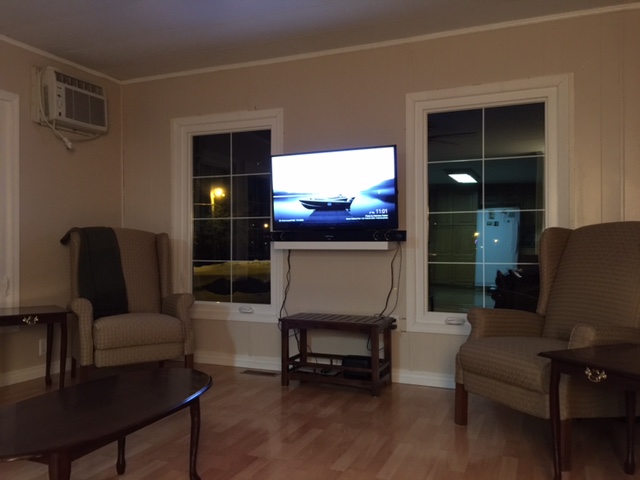 We don't typically spend a lot of time sitting in front of a TV, and we don't have access to regular TV channels or cable TV, but  but it's nice to have access to all the apps on a Smart TV when we do want to watch something.

The interesting, or should I say, challenging thing for us, was to find enough Smarts between our two old brains to figure out how to operate the darn thing. It took some doing but we can both be rather stubborn when it comes to certain kinds of challenges. Through trial and error, and a few choice words, we eventually worked through the frustrations and figured things out to where we pretty much know what we're doing now. As long as our tired old brains don't forget that is.